I do not consider myself a particularly political person, but in light of the election this year, and what seems like a constant storm of political commentary and confusion both within the Christian community and without, I feel the need to speak up about a few things. So that I don’t overwhelm you, I’m going to break this into several installments. Now, before I start, I want to give the disclaimer that I know I may be stepping on some toes. I will probably be suggesting things that go against your personal grain, no matter what side of an issue you are on. Please know, though, that I am not specifically trying to take sides in what I say here. None of this is in support of any party, candidate, or law. I simply want to open your minds up to thinking about things in a new way, perhaps a better way. Please feel free to comment and discuss as long as you are willing to keep the conversation civil.

So, to start off, I’d like to ask you

Can we stop equating patriotism with piety? 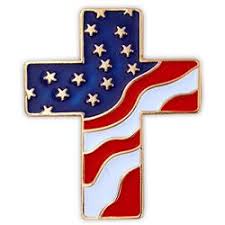 Display your love of Jesus and America at the same time!

I love Jesus; I like living in America. In my mind, the two are not connected. Yes, I have the freedom to love Jesus without worrying about the consequences, but I am not more of a Christian because I am also an American. Sometimes we are told the lie that we live in a Christian nation. That is absolutely not the case, nor should it be, according to our Constitution. We may be a nation with a lot of Christians in it, but Christianity really has nothing to do with the founding of our country (more on that in another post), nor with its continued success – or failure, for that matter. To love God does not mean we necessarily love America, and to love America does not mean we necessarily love God. I have met some amazing Christians who live in India, Spain, Mexico, Palestine, Israel, and many other countries,  and they love Jesus just as much as I do. Not all of them love America, or even see it as all that relevant in their lives. But Jesus, He is always relevant to them.

I fear that at times, and especially in some churches, Americanism is thought of as part of the Gospel. It’s up to Americans to spread the Gospel to the rest of the world, America is God’s second chosen nation after Israel, America is blessed because we are Christians, America is going to pot because we’re not Christian enough, and so on. I get so frustrated when I walk into church and there are American flags everywhere, and when we say the pledge of allegiance or sing patriotic songs during a church service. That’s not church, that’s a pep rally. As I said, I’m very glad I live in America, but I have absolutely no interest in worshiping America when I have come to worship the Lord. Please, please don’t turn our flag, which should stand for freedom, bravery, truthfulness, and strength, into a patriotic idol.

This is not to say that you shouldn’t be patriotic if you are a Christian. You should, to an extent. There are times and places that are appropriate for expressing your joy at living in a mostly free and mostly prosperous nation. You and I are extremely blessed in many ways to live in the U.S. Are Christians in Scotland, France, Poland, Papua New Guinea or Brazil less blessed? If you were to sit down with them and really discuss it, I believe that they would say absolutely not.  I think we need to begin our discussion of how Christians should look at politics and elections by grabbing hold of the fact that we are Christians first, and Americans second. If China, or Mexico, or Russia, or Iran were to suddenly take control of the U.S., would you cease to be a Christian? Would you love God less? I hope not.

In light of this, I want to also ask you,

Can we stop being proud, and start being thankful? There is a song that makes me cringe every time I hear it. A song that many people love. In fact, in the post-9-11 world, it has become somewhat of a second national anthem for many in America, that is Lee Greenwood’s God Bless the USA.   It’s probably not the best example of patriotic music ever written, but that’s not why it makes me cringe. It’s that word ‘proud’ in its chorus: “I’m proud to be an American, where at least I know I”m free…” I’m not proud to be an American, and I don’t think you should be either. Now, before you pull out your 2nd Amendment-protected shotguns and shoot me on the spot, I want to break that down for you.

Besides the fact that there are many, many things that we as Americans should not be proud of in our history (more on that later too), there is the fact that most of us didn’t do anything to become Americans. Most of us did not come from poorer or more oppressive nations and start new lives here, working hard to become citizens. Many of us have not fought in wars to help ensure the freedoms of those in this country or in others, though we should have profound respect and appreciation for those who have.  Most of us were simply born into our “Americanness” and have enjoyed the benefits of living in this country our whole lives.

That is not to say that we don’t contribute to our nation by exercising our rights in government, by paying our taxes, and by building better economies and communities. But very little of that is something we can really be proud of on a national scale. You may be proud of your small business, as you well should be, but your small business has not solved our economic problems as a nation. You may feel good about how you voted in the last election, but your vote alone has not changed the laws, the morals, the culture of the country. You did not declare our independence from Britain, fight in the Revolutionary or Civil wars, draft the constitution, or author the Bill of Rights. You inherited the benefits and blessings of those who did. You have nothing to be proud of, in the strict sense of the word.

While I don’t feel that America is the greatest nation in all respects, nor do I think it’s the only place I could live happily, I am certainly thankful beyond what I can express that God chose to bring me into the world here. If we’re going to be Americans, and we want something to be proud of, let’s be proud of our work to uphold the rights of the oppressed, to alleviate the suffering of the poor, to bring justice to all, to genuinely care for our neighbor. And when I say this, I don’t mean to be proud of doing this as a nation, but as individual Americans. What do you say? Because that is a pride I could get behind.

One thought on “In This Election Year, Can We…?”